Social Media and Digital Marketing for the Noob and I

Being the type to not have engaged in social media (shocking I know) or the type to have much knowledge of Digital Marketing, I entered into the Digital world with little to no basic knowledge or connection with it. I know I mustn’t be the only one who struggled to come to terms with everything digital so I am going to supply some helpful articles throughout this post.

One of the most remarkable things about the internet is its ability to provide you with solutions to almost any query or problem you may have! The Article The Noob Guide to Online Marketing found here is one such example and has a comprehensive chart that breaks down the key components of Digital Marketing. And as the title suggests, it has been designed for “noobs” which can roughly be translated as someone that has little to no knowledge or skill at something.

Another article I found really helpful was The Beginner’s Guide to Social Media found here. This article not only breaks down how to use Social Media, but it does it in specific section tailored to a Social Media site. In particular I would recommend checking out the LinkedIn section, which has some really helpful tips on how to set up your LinkedIn page.

I know social media can be a bit daunting but I believe it is fast becoming a very important aspect to everyday life and you do not want to be left behind during this mass shift of communication to the digital realm. As technology continues to evolve and communication becomes more of a deep set fixture online, people must make moves to ‘get involved’. In contrast to this, the article Social Media Noobs and Gurus found here, thinks otherwise and discusses how experts look down on newcomers to social media.

The Myths and Legends of Old

Myths and legends have long since been popular bases for amazing bed time stories, but this blog post isn’t going to be focusing on the myth of the monster in the closet. In this day in age, just about everything can be attached with a partially true, but mostly false assumption and Social Media hasn’t escaped this. The article 11 Big Myths About Social Media and Content Marketing found here, brings to mind some common and in some cases, pesky marketing fables.

One myth I found particularly fascinating is that “Social Media will kill Email”. It is common and practiced knowledge that consumers cannot sign up to social media sites without a valid email account. Organisations that wish to pursue a combination of both social media and email marketing and promotion should be aware of this link and use it as an opportunity to strengthen their campaign. And if this isn’t enough incentive to believe that both email is not being phased out by Social Media, the article How Many Email Users are There? found here, supplies statistics that suggest approximately 2.9 billion email users. The article Social Networking Reaches Nearly One in Four Around the World found here, estimates 1.47 billion people around the world participate in social networks. This article also supplies a comprehensive break down on Social Networking usage and is well worth a look!

In any case it is important to do your research before believing in a myth such as the above, the article Email and Social Media: Playing in the Same Sandbox found here, highlights some noteworthy benefits such as increasing the rate of return and exposure with integrating social media to email programs.

Some Myths and Legends are more believable then the next, but you might want to pay attention to what you believe in when it comes down to Social business.

Sold! To the Highest Bidder

I’ve always wondered what the deal was with spam emails. In fact I always assumed it was something to do with not being able to come up with a password that would make Da Vinci proud (something I’ve never been good at). However contrary to my naïve belief, spam emails are actually in part, the result of organizations that get a hold of your email through common means (subscriptions, competitions etc) which they then go on to sell off to the highest bidder! The article One Simple CAN-SPAM Addition That Could Transform Your Email Marketing found here outlines some tough truths.

So how can you stop websites you once trusted that may potentially be sizing up how much they can make from selling of your details to another site?…. well that’s a bit of a difficult question to answer. But one of the most common ways for the savvy consumer to attempt to stay one step ahead is reading the fine print. Use common sense when it comes to subscriptions and make sure you understand what you are signing up too. The article 5 Ways to Stop Spam Email Today found here suggests some useful tips on how to prevent email spamming.

Lots of email engines like Gmail and Hotmail offer built in spam filters, however it’s important to be aware that more often than not, an important email can end up in the spam folder so keep an eye on it! The article How can I stop Getting Spam Emails?  found here, expands on this further.

There are a few interesting laws and regulations around email spam and the NZ Department of Internal Affairs has a comprehensive web page outlining them found here. Any Marketer looking to use digital marketing in the future should give these a read before pursuing some potentially illegal, spamming!

The Mystery of the Underlying Message

Subliminal messaging has always been a bit of a controversial topic with which many great minds debate the feasibility or lack thereof such a concept influencing the consumers’ decision making process. The article The truth behind subliminal marketing messages found here discusses how it works and provides some convincing examples on the matter.

Perhaps it is the association with familiar words, objects etc that subliminal messaging uses to encourage a particular perception. Then again there is no reliable evidence to suggest this to be true. The article Subliminal Perception: Facts and Fallacies found here, discusses this further.

Subliminal messaging is suggested to target and draw response from the subconscious mind almost instantaneously and will only last for the briefest of moments. And although there is no actual proof to this, records of its use date back to 1897 where soldiers were very briefly presented with images of enemy planes in order to help them differentiate them from the friendly. The article 10 Facts about subliminal messaging found here, discusses some of the most noteworthy attempts at using subliminal messaging.

Well it is apparent that there is more information to suggest that subliminal messaging is but a myth, there is also a notable amount of information to propose otherwise.

Social media platforms like Twitter and Facebook are in part, a tool to give Tom, Dick and the rest of the world a glimpse or (if your enthusiastic) a minute by minute account of what’s happening in your life. But how much is too much info? And is there an element of professionalism that some have missed the memo on? The article Man tweets for weed; job goes up in smoke found here, highlights a smokey no no.

When an American car repair shop worker got struck with the cloud of boredom, his silver lining of an idea was too Tweet his local drug dealer. Said worker went on to specify he wanted a ‘joint’ delivered too his workplace. One thing led to another and not only did the local police authorities get in on the tweeting action, but the authorities forwarded the tweet onto one of the board of directors of the repair shop. Needless to say the ‘joint’ seeker lost his job.

I think it’s pretty fair to say that a Tweet like that is about as unprofessional as they come. But that doesn’t mean to say that if you have a job, that you can no longer use your social media accounts for personal use. It’s all about finding the balance between presenting a professional image and maintaining an individual presence. The article Using Twitter Professionally vs. Personally found here has some useful tips and boundaries for twitter users.

The article The Fine Art to Juggling Personal and Professional Twitter Accounts found here, suggests that having separate twitter accounts is the way to go for those who are Twittaholics but still want to remain professional. It also provides some handy tips on keeping things real but professional at the same time.

It is important to note that employers don’t expect you to be all ‘suit and tie’ about your social media presence, in fact many organisations and professionals encourage social media users to add personal touches too there professional interactions. The article Finding the balance between personal and professional on Twitter found here, expands and discusses this concept further.

Social media is all about expressing yourself as an individual and perhaps professionalism isn’t something that crosses your mind every time you post or tweet, but there is some common sense involved (acceptable and not acceptable postings). Perhaps one should think before you Tweet! Otherwise you might find yourself caught in the smoke cloud of unemployment.

It’s all about the people 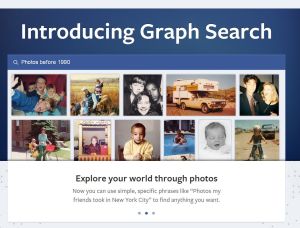 Facebook has taken the online social media world by storm and it’s no wonder that businesses are looking to capitalise on this phenomenon. Previously it has been difficult for businesses to use Facebook as a relative and accurate source of secondary data, but recent developments have seen a change in favour of these emerging tech savvy companies!

The article 7 Facebook Graph Searches That Will Give Your Business An Edge found here, highlights seven handy graph searches that can give businesses useful insight into who likes there business, demographical info and many other useful pieces of information.

One of the most beneficial and interesting accepts of this Facebook search option is Facebook users take the time to really think about what they ‘like’ and in considering this, businesses have the ability to use the graphed information to develop a digital marketing strategy for their online Facebook page.  A visual overview of the graph search interface and how it works can be found here.

So what does Facebook graph search mean to businesses? In the most basic of terms, it is an online S.W.O.T analysis database that segments consumers based on their ‘likes’. For example, if Karen walker typed in “people who like Karen walker and Parnell” the graph search would display how many people who lived in Parnell and liked the Karen Walker page. Karen Walker could then use this information to target this market segment.

Sounds too good to be true right? Well there is some interesting controversy buzzing around the internet about privacy issues. The article Facebook’s Graph Search worries security experts found here, provides a comprehensive overview on the potential privacy issues the Facebook graph search may cause users.

Currently the Facebook graph search is only available to roughly 1.1 billion users (unfortunately NZ isn’t on their radar at the moment) as the developers continue to work out the nuts and bolts. The article Facebook rolls out graph search found here, further explains this.